Today is the 2nd August. The 5th anniversary of the day our lives were forever changed by Mojo’s diagnosis.

I started to write a post that was a letter to myself five years ago. What would I want her to know?

I couldn’t find the right words, I was going in circles. Part of me wanted to say ‘everything will be okay’ but that isn’t true and certainly wasn’t true then. I wanted to tell her all the things her baby is going to achieve but I was worried she wouldn’t appreciate them without the strive to get there. I was worried she would only see the implications of what she can’t do. I found myself wanting to protect 4 year old Mojo from 5 years ago me’s judgement. Let’s be honest I over-thought it. Massively.

So I abandoned it and instead offer this Olympic themed story for this year’s Diagnosis Day.

torch parade and had her photo taken with a Paralympic torch in Sainsburys (as you do). I found the Paralympics fantastically inspiring. The Channel 4 coverage led with the slogan ‘Meet the Superhumans’ and even though we were only just beginning to learn what Mojo was capable of it stuck with me, she was a little superhuman in training.

When the advert for the Rio Paralympics was launched recently with the soundtrack ‘Yes I Can’ it felt amazingly appropriate for the next stage of her development. I just love it. I love the music, I love the strength of the imagery. For Mojo, and other children like her who are just starting to explore the world for themselves I love the message this gives them about limitations and achievements. (Link to see ‘Yes I Can’ trailer). We met our little superhuman four years ago and in a world where she was told she couldn’t before she had even taken her first breath she resolutely and loudly proved ‘Yes I can’. 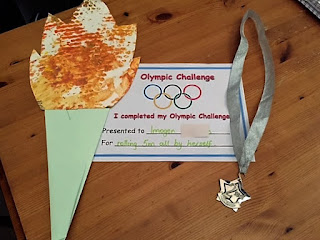 At the end of the school term Mojo took part in Olympics week. Each child was given a bespoke Olympic challenge to complete as part of the event. When the sponsorship form arrived home in her bag I was a bit taken aback. I will ‘roll for 5 meters on my own’ it said. This time last year that would have been an impossible dream. Only a few months ago she hated lying on her stomach and was unable to roll from back to front independently. The effort, determination and bloody mindedness that has brought her to being able to attempt a challenge like that is completely beyond me. My amazing superhuman. My girl. It might seem like a very mundane achievement but it is truly a remarkable feat of endurance.

On sports day we watched as she wholeheartedly competed in team games with her schoolmates. The concentration as she knocked down skittles, carried buckets and threw balls was breathtakingly beautiful. Those few hours watching the children competing, achieving and enjoying every moment were amongst the most life-affirming I’ve had. Children I’ve only ever seen in their wheelchairs making spectacular, emotive, efforts to take part in their walking frames. The atmosphere of support, encouragement and unadulterated pride was palpable. My very favourite photo of that day is of Mojo taking part in a skittle relay, her teacher is pushing her chair and she is reaching out for a skittle to knock down. She is in focus and the background is slightly blurred but what you can pick out are the arms in the air and the open mouthed encouragement coming from each of the spectators, some friends, most strangers, all shouting her name, all willing her on. Lump in throat time.

It might not be the real Paralympics but it might as well have been for the joy I felt.

On the last day of term I collected Mojo and she was holding a certificate, a special recognition award for her consistent achievement in communication and physical development this year.

‘We only give out a few of these you know’ the headteacher said.

I think she thought I was being dismissive, when in truth I was trying to hold it together. I did so until the drive home when I sobbed with such happiness and pride and love for my remarkable daughter.

5 years ago today they said she can’t, she won’t.