Two adults and two children sat round a table and had dinner. They all ate, they all laughed, they all talked about their day.

Not exactly ground-breaking family activity, right? But it was for us.

There is something emotive about food. Nourishing your family. The association between food and love.

Before Mojo had her g-tube fitted 18 months ago, feeding her dominated my every waking thought. It consumed me (if you’ll excuse the pun). The hours I spent syringe feeding milk, 5mls at a time, to try and reach the magic 600ml volume prescribed by her endocrinologist. It was torture for us both. At that time she was eating some solid food too, only tiny amounts and it required full supervision, with very specific environmental criteria. On the days when I got half of a baby portion into her I celebrated a victory.
You would think then that the decision to have her feeding tube fitted would be a no-brainer. Why would we not want to make life easier for us both. The answer was, like everything, a bit more complex. It felt like admitting defeat, like I was letting her down. It felt like a step towards a more dependant lifestyle. I felt guilty for having a permanent hole put into my baby girl’s perfect tummy. It felt like another step away from a ‘normal’ life (as though spending 6 hours a day trying to feed her was normal!). I told myself it would be there for fluid balance emergencies only and it would not change how hard we worked to help her enjoy food. I told myself that one day she might be able to have it removed.

So we went ahead.

The first time I fed her while she slept I’m pretty sure I heard the Hallelujah Chorus. To say that it changed our lives is an understatement. Overnight we went from battling to get 500ml into her, to being able to give her 750ml and a fixed volume of nutritionally complete liquid food. The sense of relief was tangible for months and even now I never tire of being able to ‘top her up’ when she is poorly. For the first time in her life she put on weight consistently and her sodium level, a problem since birth, fell into the normal range taking her officially out of immediate danger from it.
This isn’t to say that the feeding tube came without its challenges. Vomitting was the biggest of these. Oh god the vomiting. It was epic. At times it felt like trying to fill up a bucket with holes in. We were having to put 1800ml into her (over 24 hours!) just to retain 800ml. That’s a litre of sick a day, Nice eh!
So distracted was I with cleaning up sick and tending to repeated site infections, I barely noticed that within a few weeks Mojo had stopped eating completely. It made her sick so she just stopped. We were so desperate to get the vomit under control that we temporarily allowed her to refuse solids thinking it might allow her stomach time to adjust. In doing so we allowed her to realise that eating was something she didn’t HAVE to do anymore.
It took a whole year, a range of investigations and various medications for the vomiting to stabilise.

Since then getting Mojo to take up recreational eating has been an uphill struggle and one we have taken very gently. We have consistently offered her snacks, meals and drinks and she has on the whole (with the exception of ice cream) refused all of them. We pay for ‘taster’ school meals so that she sits at the table with her friends and goes through the motions of sharing a meal. I’ve counted nine occasions over this school year that her home/school book says that she has tried her food.

Most of those nine have been in the past couple of weeks. Something has changed and suddenly Mojo is interested in food again. Not just eating the occasional mouthful absent mindedly, but actively eating multiple mouthfuls.  More significantly she has asked for food. She has communicated with noises, actions and using her communication book, that she wants food and then she has eaten what I have offered her.

Almost two years has passed since she was last eating regularly and in that time her physical development has come on hugely. This means that performing the action of moving a spoon from bowl to mouth can be done independently and while for every three spoons only about half a spoon reaches her mouth it is SO worth it to watch her successfully self feed. Independence; the holy grail.

For me, the most emotionally significant was that ordinary Tuesday evening when, after school we sat down as a family and had dinner together. It wasn’t a pretence, it wasn’t for effect to make us feel like we were eating together, it was real. A real family dinner.

It couldn’t be replicated on Wednesday (or Thursday, or Friday) but it didn’t matter because we now know that it’s possible. For Mojo and for us as a team, the hunger is back and we are going to work very hard to satisfy it. 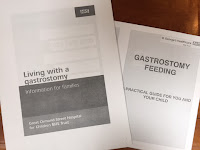