Two things I hoped would never happen, happened this week. Firstly, I had my first ride in an ambulance and secondly I started a medical notes folder for my youngest daughter.

The ambulance ride I always expected would happen one day. What I never considered was that it wouldn’t be Mojo I was cradling, but instead, my conventional, easy, healthy baby. My baby who medically speaking, until Monday, only had her red book and her up to date immunisations to remark upon. I said as much to every single medic we met that day. ‘This is my non-complex one’ I must have said it at least 20 times. Nurses did double takes, ‘I know you don’t I? This isn’t your usual child?’

This particular hospital adventure began when I went to try and wake Chloe up after a long nap and found she was unconscious. One vomit inducing 999 call later and the paramedics arrived, my mouth was answering their questions, my hands were comforting Chloe’s tiny sweaty form but my head was in full screaming meltdown. This. Isn’t. Happening.

The experience of trying to wake a child who isn’t waking up is not one I ever wish to repeat, the initial eye roll when I thought she was just deeply asleep, tipping into the realisation that she wasn’t conscious. It’s a nightmare I’ve contemplated many times, but never with this daughter. It was like there had been some kind of heavenly admin error. As ridiculous as that sounds that is how it felt.

With the cause easily (& thankfully) established as severe hypoglycaemia we headed to the hospital.

While sitting in the A&E waiting room (where the producers of 24hrs in A&E must think I’m so desperate to get on telly that I keep turning up with various offspring to see if they are interesting enough!) I received a call from Mojo’s school to say that she was unwell and would benefit from being collected early from school. I should point out too that currently my husband is in Australia working for a month.

Okay…. just hold the line for a moment while my head explodes. Mercifully, my ever-fabulous mum in cooperation with Mojo’s wonderful school, was on hand to sweep up the chaos, collecting, feeding and nursing Mojo while I dealt with our newfound medical drama.

Usually if I leave Mojo for any period of time I leave a detailed feeding/meds timetable and multitudes of notes, flow diagrams of what-to-do-if scenarios, you get the idea. Being unexpectedly away from her and while she was unwell was disconcerting. I was drafting emails to my mum with fluid balance calculations and medicine schedules while trying to chase Chloe around with a plastic cup to get a urine sample. Note to self on this, one job at a time, nobody wins when you turn your back to try and pick up the wifi signal and miss the wee (which goes instead, all over the pile of toys provided by the lovely play specialist at the hospital, ‘oh dear mummy’)

I’ve always been wary of taking Chloe’s development for granted. I’ve consciously celebrated each of her milestones the way we always have done with Mojo. Chloe’s come far more frequently and reliably but they are no less treasured, in fact I think I value them more because I am constantly in awe of little human brains and the monumental amount of awesome things they do in these developing years. We have come to know so many children for whom that conventional development route is a daily battle that I’ve come to see ‘normal’ as pretty remarkable in itself.

Chloe’s health, however, is not something I’ve ever really considered. Once we had been to her first 12 week scan and the clear division of her brain was evident, that was that, she was going to be a healthy baby. Why on earth I would think that she would be protected from harm by virtue of having a complex sister I honestly don’t know. There is no quota of health per family, no maximum amount of drama per household.

So where are we now? We are left with two likely options for what caused her to go into hypoglycaemic meltdown. Firstly, that it is a problem to do with processing fats in the body. ‘It’s extremely rare’ said the doctor, how I laughed. Secondly and more likely, is that it was just the perfect storm of circumstances, missing breakfast, coming down with a cold, teething, all coming together to cause a crash in her blood sugar. We wait 8 weeks for blood results.

Chloe meanwhile thinks all her Christmasses have come at once as suddenly I’m allowing cake at all hours of the day and night until I can be sure that she isn’t going to slip into a coma on me. When the tests come back clear I’m sure it won’t be a problem re-introducing rice cakes where for 8 weeks there were Jammy Dodgers, right…? 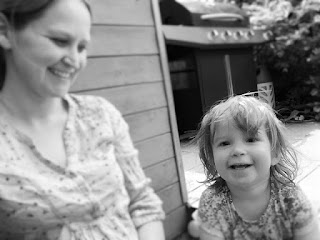